It is a quite rare vintage and a Cuvée Prestige, as we say in France ... handling wine. What I bottled here in 2001 is unique: Petroleum (right) from the Pechelbronn Formation in the Upper Rhine Graben, coming from a modern drilling well - and bitumen (left) found in the forest of Pechelbronn, taken from a famous "source", which is in reality only a sticky puddle. Extremely viscous, sticky mass in a jam jar - compared to a syrupy bottle filling. Both almost blackish brown, but smelling differently. 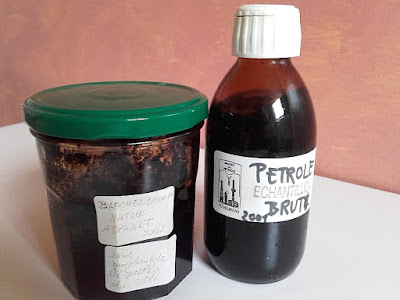 These both containers are worlds (even times) apart, telling completely different stories of our way to interact with nature. Between my scratching with an old kitchen spoon and the modern oil drill we can find out much about human attitudes to deal with the earth. Can these glasses shed some light on the shift into the Anthropocene? Questions that might have to be answered after extensive research. These are the questions I am interested in for my project.

My jam jar tells of a personal adventure, the proud inscription says: "First exploited oil well in the world". In 2001 I didn't know it any better. It was certainly the first industrially exploited oil in the western world, but the relationship between humans and oil is much older.

Let me first define the content for laypersons: Petroleum is crude oil, the liquid naturally occuring in deep soils, while bitumen (American: asphalt) is the semi-liquid form of petroleum. Bitumen can also be found aboveground as part of rocks, swimming on lakes, as sticky puddles, but also in oil sands underground.

In 2001 I wanted to investigate the forest of Pechelbronn in Eastern France by descriptions that were hundreds of years old, with poorly drawn plans in my pocket to find the famous "Baechel Brunn", which is natural bitumen. In my backpack: a pocket knife, an old teaspoon, a jam jar. But forget historical maps when you can find wild boars! They like to use aboveground crude oil for skin care and toss and turn in it to get rid of parasites. When the sticky layer then freezes in winter or drips in the summer heat, when it itches unpleasantly, the boar simply rubs its body against the nearest tree trunk to be more or less clean.

The locals of Pechelbronn immediately recognize these tree trunks, resinous and blackened at the bottom. By touching them carefully, it is even possible to determine exactly what the wild boar was bathing in. A hard black crust indicates bitumen. If, on the other hand, the tree bark shimmers through a brownish glaze, then probably strong rain has pushed liquid oil from the ground up into puddles, perhaps even into the brook. So my dog Bilbo, a beagle mix, can easily trace petroleum ... by sniffing wild boars after skin care.

When I discovered it, there was only a remnant of the world famous "petroleum well" left. Having caused a total change of a region and a hellish story similar to the "Dynasty" soap opera in former centuries, nowadays only an unimpressive hole shines between these famous blackend trees: a "saulach", as it is called in Alsatian dialect, a "pig's puddle".

In the summer heat different smells float in the air: from notes of warm grass and spicy herbs to an unknown, but strangely familiar full-bodied scent. Something smooth and slightly frowsty, the way deer rub smells or antlers, freshly fallen off. And there is a second fragrance that overlays the musty one: like fresh spruce needles, slightly reminiscent of Turpentine. Could it have been this scent that once led to the outdated theory, that petroleum originated from ancient forests, sunken deep into the earth? We know it better now: Recent theories see marin life as origins, organic matter from protohistoric seas.

Bitumen in nature has a rather pleasant odour. It only smells asphalt, when it hardens or becomes old. And so it attracted people right from the very beginning. They followed the animals and the smell, learned from them and also tried the medicine. In the Middle Ages, when parasites plagued humans like animals, and itching as well as skin diseases seemed to be widespread, this puddle was considered the most valuable medicine.

In the 15th and 16th centuries, the writings of pharmacists and doctors, who were very fond of themselves, praised the healing powers of "earth pitch". People searched for the miraculous medicine in the same way as for medicinal herbs. They scooped up what they needed, it rose up from the earth. This use seems almost as innocent as the ones in ancient times, of which we know from archaeological finds. The earliest use seems to date to Stone Age, when Homo neanderthalensis glued an arrowhead of stone by naturally found bitumen. In Mesopotamia there was a centre of using bitumen, naturally occuring there like the black balsam of the Middle East, swimming on water. The ancient Egypts used bitumen for preserving mummies.

Earth is offering a gift, humans find it by accident, discover a benefit and then search for it. They learn to use it. There is still no difference to birds using long spikes as tools or monkeys optimizing the use of tools. It is still nothing else than natural behavior of living beings.

There must have been a tipping point for the worse. When did it happen? When did natural use, in respect of the earth and its resources, transform into exploitation? When did humans want to have more than just their current needs satisfied?

Did the calamity of our time already begin, when the Egyptians established a kind of "industry" for mummification? Did the turning point perhaps already occur in the Stone Age, when the stuck arrowhead no longer killed an animal for food, but another human being? And when did the knowledge about the bitumen source of Pechelbronn derail in greed? Was it the famous author of the Simplicius Simplicissimus, Grimmelshausen, who in 17th century sold the highly demanded "golden water" from Pechelbronn in mouth-blown glass bottles? It should have cost far too much money, perhaps even been counterfeit, this can be read in regional writings.

Somewhere between these two receptacles, these two blackish matters, is hidden the tipping point of our history, with which we have changed the earth in such a way that we experience the environment as hostile. For petroleum as in this flask - or rather what man made of it - led centuries later to climate change and species extinction.
Labels: Bitumen Climate Change Featured Forest & Trees Knowledge Nature Writing Oil History Pechelbronn Petroleum species extinction Walking 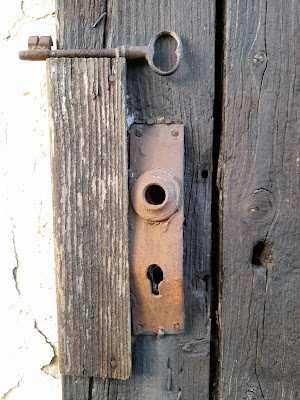